The Controversial "RED DROP" Is Back!

It came and went in an instant! The controversial Red Drop project, known as "The Tears Of The People" page on Facebook, was created to raise funds and awareness for the global MMIW Campaign (Missing Murdered Indigenous Women's campaign), by a Canadian gentleman, but was brutally attacked and dismantled almost as soon as it was created and made public.

Michael Coles, founder of The Drop Of Water Campaign Facebook Page, and The Tears Of The People, has been working closely with us here at www.TheDropOfWater.com since our website launched on August 8, 2017. He miraculously stumbled upon our website the first day it was launched and decided to join our cause of gifting out The Drop Of Water to hundreds of Water Protectors in Canada. He funded his campaign out of his own pockets and purchased glass drops from us at wholesale cost in order to gift many of them away. He created and utilizes The Drop Of Water Campaign on FB in order to sell drops as a way of off setting his gifting costs.

After a few years of us working together, Coles was blessed with a new mission from Creator. Through multiple introductions and interactions with Elders and Indigenous Grandmothers, as well as invitations to several sacred water ceremonies held in Canada, It was declared that a Red Drop would be created by us here at TheDropOfWater.com in order to raise funds and awareness for the MMIW campaigns throughout all of Canada and the United States of America in an effort to bring us together for a common cause and fight.

137 Red Drops were ordered to be taken to ceremony and then gifted out to specific individuals who have been involved in this movement for multiple decades. Several of the 137 Red Drops were also inquired about by multiple supporters of the MMIW Movement in both countries, as they wanted to help raise funds and show their personal support as well. Because The Red Drop was not officially made available for sale to the general public at that time, Coles decided on a price of $50 each to sell a few of the initial drops in order to help get this campaign launched and to start raising funds for the specific selected MMIW Groups who decided at that time they wanted to get involved and would benefit from the donations and proceeds from The Red Drop Campaign. Eventually these groups were going to receive 100% of the profits to help aid in their individual campaigns.

It was at that point in time that the entire mission was sabotaged by several individual females who claim to be part of a collective of "Angry Matriarchs" who led and organized several MMIW Groups in the US, who were passionately against the selling of these drops by a "white man" from Canada. But they were confused in assuming that we here at TheDropOfWater.com were the actual creators of The Red Drop Campaign and manipulated Coles into selling them for us, which led to an onslaught of verbal abuse, harassment, physical threats of violence, slander, and against our business, which costs us several thousand dollars in profits and revenue, and extreme hardships in our personal lives because our way of making a living became under attack resulting in the loss of thousands of supporters and followers due to lies and assumptions.

The initial 137 Red Drops were made specifically by the hands of Dan "TheGlassman" Garduno, owner, founder, and artist of TheDropOfWater.com. Coles paid for the material costs to have these 137 drops made and shipped to Canada. "TheGlassman" was supposed to be commissioned as an artist to make these 137 drops at $7 per drop once sales began, but when accusations were made that he was specifically the mastermind behind this mission and trying to profit off of the pain and anguish of those affected by the MMIW Movement, he decided not to accept payment from Coles, resulting in all 137 Red Drops made by his hands, to be gifted to the cause for free. Coles also decided to pull his Tears Of The People campaign and to hold on to the remaining 100+ Red Drops which are currently being kept safe until they can be disbursed at the appropriate time to specific individuals who are directly involved or affected within the MMIW Movement.

TheDropOfWater.com decided to take a step back from the public eye for several months and allow the "waters" to settle. During this time of reflection we have decided to take it upon ourselves to move forward with the Re-Introduction of The Controversial Red Drop and to re-establish a whole new mission inclusive of All People from All Walks of Life.

We will not allow another's anger or rage to stop our mission of sharing love, raising awareness, and doing what we can to help others raise funds for their cause!

We will continue to Rise UP!

The Red Drop will now "Honor All The Blood Spilled From All Our People."

(To Honor All God's Children!)

We apologize to the entire MMIW Movement for being forced to take this project and mission specifically away from you and any financial help we could've offered to your organizations through The Tears Of The People Campaign.

(However, please let us know if you'd still like to get involved with The Red Drop.

We will donate a portion of the proceeds to those of you who'd like to get your charity or group involved.)

We Are All Connected!

We Are All God's Children!

We All Bleed The Same Blood!

We Are All One!

We here at TheDropOfWater.com Stand For Unity, NOT Division!

We Are All Indigenous To Creator's Earth!

We Are All Native To This Planet!

Remember... We Are All Drops of Water in This Vast Ocean of Life!

"Water Is Life... Every Drop Counts!" 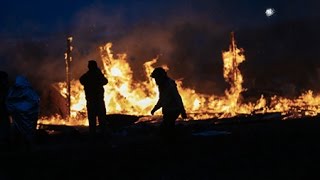 STANDING ROCK: THE MOST CRUCIAL FIGHT FOR WATER THE WORLD DIDN'T SEE